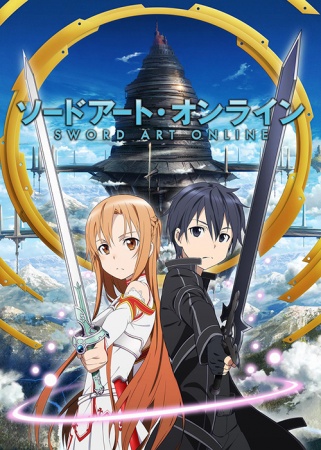 Everything begins in November 6, 2022 where close to 10,000 players are stucked in a VRMMORPG (Virtual Reality Massively Multiplayer Online Role-Playing Game), a video game online. Players connect with a headset that stimulates the five senses of the user through their brain, they can discover and control their characters in the game with their minds. To return to real life and break free, players must reach the last level of the game in the 100th floor of the castle game and defeat the final boss, knowing that at each level there is a boss more hard to beat. All players must fight to survive because for all who die inside the game, dies in real life. And for those to whom we host the headset before you finish the game, also dies in real life.

The hero "Kirito", whose real name Kazuto Kirigaya, was part of the 1000 beta tester in the previous version of the game. He took advantage of his previous experience of playing in beta and a drive to protect other beta testers from discrimination, to advance gradually to the highest level. Thus he isolates from the main group and plays the game alone, he was named "cheater beta". This is where the adventure begins, the more Kirito will progress in the game and the more allies he'll make with the aim of destroying the final boss and liberate everyone.

This is an anime that is well known. The story is really interesting and it is easy to identify with the characters. They are both fascinating and fragile according to their situation. And yet they fight against fate and try to break free despite all obstacles. We would like to play and actually enter a similar virtual reality, soaking up everything around us as if it was real, feel the magic as if it existed .