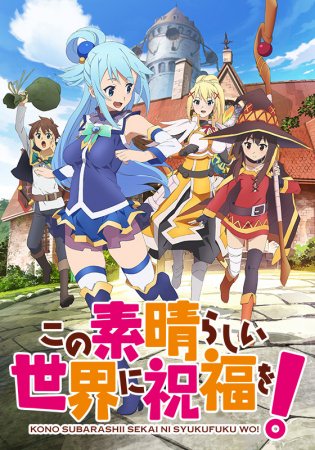 After a premature and pathetic death, Kazuma Satō, a reclusive high school student and an otaku, is offered a second chance in a parallel world by the goddess Aqua, guide for human who dies young in Japan to the New World. In fact, she offered him to reincarnate into a real fantasy world, the dream of every otaku as Kazuma Satō. He will go on adventures and fight battles with monsters. In addition to live in this new world, Kazuma Satō has the right to choose any item (magic sword, weapon, super powers, ...) to help him in his quest. To her misfortune, Kazuma Satō chose to take with him in this adventurous world the goddess Aqua herself. He will quickly realize that this goddess is completely useless and probably he has made a huge mistake ...

This anime is really funny. The drawings are well made and the opening is very nice. We laugh a lot seeing Kazuma Satō use all his skills as otaku and do everything to succeed his quest, while the goddess Aqua, supposed to be the incarnation of perfection, mess up and always puts both of them in dangerous situations. There are two other characters who will appear later and be part of their group. Unfortunately, they are also as pathetic and stupid as Aqua, a super powerful witch who turns out to use a single & one spell and a woman- knight who is a little crazy, she is masochistic in the extreme and always goes first on a suicide mission head down. They accumulate blunders to blunders in this group but luckily come out well of the situation.