We discovered in our kombini the seven-eleven, a box of Japanese instant noodles quite special. This is cup noodles with Japanese green tea (Matcha) from the Nissin brand. The box, alone, does not cost much compared to the other cup noodles that can be found in Japan. We paid 148 yen while the other one more ordinary of the same brand are between 120 to 140 yen. Moreover, the packaging of this cup noodles is particularly elaborated for the tourists. In fact, the box is almost all green, you can see the main symbols of Japan: the Mount Fuji, the representation of the Gods of the winds and thunder by Hokusai, a lucky cat, a geisha, sumos, ... A box with a very well-worked design that I will keep in my souvenirs only for all the typical Japanese pictures on it B-)

In terms of taste, the matcha is quite pronounced but not dominant. In fact, the noodles have matcha in it and the cup noodle has a seafood broth. So naturally you will find inside the dashi and fir the toppings : the dried vegetables and instead of dried shrimp pieces, it is dried octopus. In general, I'm not a big fan of cup noodles but this one, I think it is not bad at all. We find all that is described on the box. We can taste the matcha and the color of the noodles are quite convincing green. After all, it is true that Nissin is one of the cheapest brands of cup noodles, so do not expect it to be luxurious. But it meets all our expectations, it has a great taste (and especially the taste that is written) and it is at an affordable price :)

Pleasantly surprised, it is a cup noodle that I like the taste. This is a little bit special because everyone does not necessarily like the taste of green tea. But if you are in Tokyo, quite late and you are starving, go to a kombini and take Nissin's Matcha Seafood Cup Noodle. You will be satisfied, not disappointed by its unique taste and you will not have spent a lot. And in addition you can keep the box with its Japanese super cool design ;p 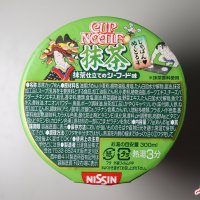 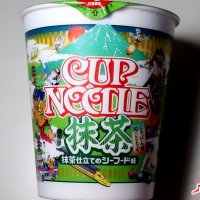 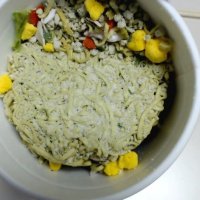