You can find in Kyoto on the walking roads Ninenzaka 二年 坂 and Sannenzaka 三年 a memorial of World War II, the Ryozen Kannon temple 霊 山 観 . It is located on the south of Maruyama Koen and Yasaka Jinja, south-east of Kyoto. It is a war memorial dedicated to soldiers killed on both sides of the Pacific War. Entrance costs 300 yen and visitors receive incense sticks to place in the pot facing the small water pool.

A giant statue of the representation of the Buddha of Mercy : Kannon (in Japanese) was built by Hirosuke Ishikawa and unveiled on June 8, 1955. This representation of the goddess Kannon measures 24m high, is all made of white concerete and steel and weighs about 500 tons. To give a proportion, her eye measures one meter in width. It is possible to penetrate inside the statue to see the Eleven-headed image of Kannon. Many names of soldiers are also kept in memorial file cards and commemorative prayers are organized four times a day. The memorial was built in the forest of Higashiyama Mountain, a memorial hall is located below the statue and honors the unknown soldier but also all the dead soldiers, whatever their camp, on both sides, allies and Japanese. Thus we find also in this memorial the 48,000 foreign soldiers who gave their life on the Japanese soil. In the sanctuary, there are also commemorative tablets of two million Japanese who died during the war and there are of course statues of Buddha and gods of Wind and Thunder.

This temple is a real haven of peace and has a very poetic setting despite the gravity of the subject it relates. It is right next to the Kodaiji temple which is handy if you want to combine the tours. We recommend this place which is truly magnificent and highly symbolic. 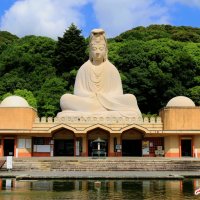 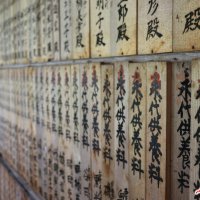 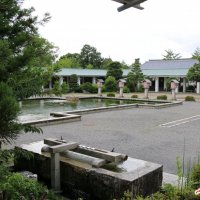 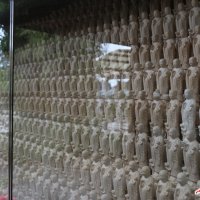 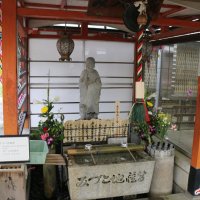