We were quite surprised when one of our Japanese knowledge told us that here in Kyoto, we could find the Kouign amann in the kombini Lawson. And yes, the Kouign amann, the special cake of the Breton region, is on sale here in the sun rising country. It's true that we had heard that the Japanese were very fond of French people, France, French specialties but then to import a regional product, I find it crazy!

The Kouign amann クイニーアマン in Japan is sold in individual size for around 130 yen one cake. It is sold ready-to-eat directly asit is exposed in heated windows of the kombini Lawson. So when you buy it, it is still warm. The Breton Kouign Amann is made of bread dough, butter and sugar. Here in Japan, it's more like puff pastry. But the cake crunch in your mouth, the butter melts and the caramel is added at the end as a layer. The whole thing is not too sweet and much less butter than the real Kouign amann we can buy in Britain. After all, the cake should be prepared by the Japanese kombini and they probably do not use as much butter as in Britain. In addition, the butter used by the Japanese are not the Breton butter so I think it's a quite good results they got with what they have available. Pierrick think it tastes a bit like the texture of croissants more than Kouign amann.

For a copy, I think the Japanese Kouign amann is pretty good and it is a version that Pierrick has no trouble to digest ;p 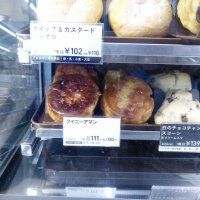 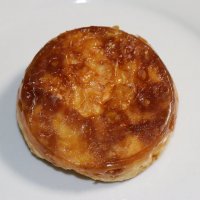 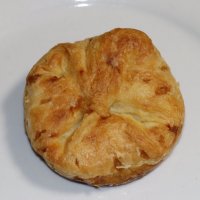