We were waiting for the night bus from Kawaguchiko to Kyoto, we decided to go to the souvenir shop in the station which is also a restaurant. In this small restaurant, some specialties of Mount Fuji and its surroundings are proposed as the Hoto Udonほ う と う う ど ん, the Fujiyama curry 富士山 カ ー レ, but also a special ice cream that is like the Mount Fuji in snow.

In fact, this ice has 2 layers of ice cream on a cone. The first layer consists of Blue Rose ice cream. The second layer is made of ice cream with vanilla to give the image of the top of Mount Fuji in the snow. The vanilla ice cream tastes rather classic, it's quite good.For the Blue Rose ice cream, it tastes slightly sweet and a bit chemical. Personally I did not like the taste of the Blue Rose ice cream, it does not taste like rose syrup or rose cake I've tasted in France. Pierrick found it pretty good. It seems that the taste of the Blue Rose is a bit little like the Turkish delight with Rose flavor. Anyway, I don't really like it but for the eyes, this ice cream is very pretty. In addition, we have seen the training of the new waitress who did not know how to make a pretty Fujiyama ice cream. It is an Art to make the ice cream cone Fujiyama Soft Ice Cream in the restaurant of Kawaguchiko Station. There, 2 instructor-waitors show her the example of a nice ice cream like the great Fujiyama :)

If you pass by the Kawguchiko JR station, take the time to eat at the station restaurant. Their menu is not very big but they offer great food and a lovely ice cream dessert. 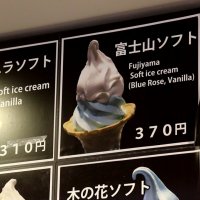 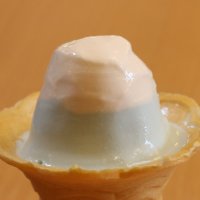 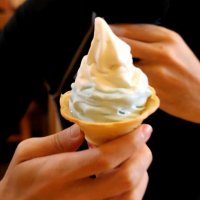