Tsukiji Ichiba was created in February 11, 1935 at the edge of Tokyo Bay. It is a market where you can find fruits and vegetables (270 varieties). But it is worldwide famous as the largest fish market in the world.

Indeed, about 1800 tons of fish are sold daily at Tsukuji for more than 480 different varieties (and 1200 tonnes of fruits and vegetables) for around 1.8 billion daily turnover. The market is 230,836 square meters and 42,000 people work in daily with about 19,000 vehicles. It is closed on Sundays and some Wednesdays per month (see calendar) .

In red, the closed day

The market is actually divided into two main areas :

The Inter Market (covered) where helds the wholesale by professionals. It is open to the public from 9:00 to 13:00. It is also there that takes place tuna auction.

The Outer market is fully open to all. This is where helds the retail. You will find fish and vegetable shops, butchers, condiments and accessories stores and restaurants. The market officially opens at 7am but some traders are already on alert from 5am (in our previous article you will see that at 6am only restaurants are actually open ) .

There are obviously some rules to follow during your visit to Tsukiji in order to not to disturb thewell functioning of the market :

The world renowned attraction,the Tuna Auction, regroups billions of visitors each year. No wonder whenyou think of the phenomenal quantity sold and the incredible price it rises. On the 5th of January every year is held the first tuna auction of the year. The first bluefin tuna is often sold to a new record price this is mostly the Sushi Zanmai restaurant chain that offers the highest auction)./p>

Exemples of price at the first Tuna Auction (5th of January) :

We went to a tuna auction. It is accessible to the public only early in the morning. There are 2 sessions of about 30 minutes . The first session begins at 5:25 and the second at 6:15. There are no reservations and is limited to 120 people per day (2 groups of 60). You have to go around 2am at the Fish Information Center (おさかな普及センター資料館) to register. In fact, the center distributes 120 bibs to represent the entry ticket to the auction. The bibs are distributed from 2:20 until finished, then the center closes its doors. The auctions are not open to the public between December 1 and January 19 of each year and when the market is closed.

To be the first and do not miss the auction, we spent a few hours in a Manga Cafe near the subway station Higashi-Ginza, the ComCom Cafe. We arrived around 21:30 and we left the premises at 2am. We took the 7hours package for 1580 yen. There is a small ten minutes walk to the Fish Information Center and we waited a bit before the distribution of the bibs. There were not too many people that day (we chose to see the auction on Friday morning). Many foreigners had done the same thing as us, so the manga cafe was almost full. Others took the last train and waited nearly 2 hours in front of the center. There are toilets nearby and the streets are always moving around, so if the weather is good and it's not too cold, it is the best plan in order to participate in the tuna auction. There was no more bib for our morning around 3:30. Once you have yours, wait in the Fish Information Center waiting room with all other participants until the start time of your session. There are no chairs or furniture in the room, everyone is waiting for almost 3 hours sitting on the ground, some stretches on the floor to take a nap. It is possible to go a bit outside of the room to take the air, stretch your legs, smoking, using the toilet or have a drink in the machines. 10 minutes before the start of the session, the guards of Tsukiji take each group to the auction building. Put yourself at the beginning of the convoy like that you will come to the forefront in the auction. Indeed, there is a corridor 1m wide to see the auction. 60 people have to line up to see the tunas placed on pallets and buyers make their inspection. As said before the visit lasts only 30 minutes, while the guards warn you when an auction starts and which side it is. It is possible as we, you can not attend the big auction but the smaller ones. Once 30 minutes have elapsed, they drive us towards the exit of the internal market. It open to the publicfrom 9am. And so that's where we headed to the external market that was beginning to emerge from the sleep and we taste our sushi at 6am :) 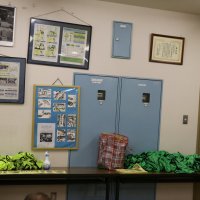 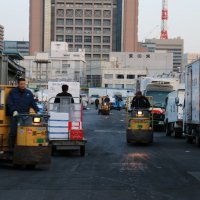 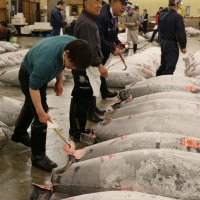 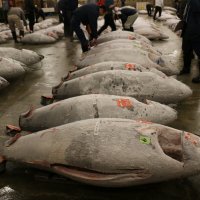 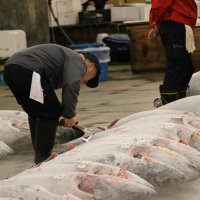 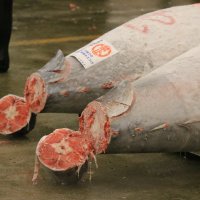 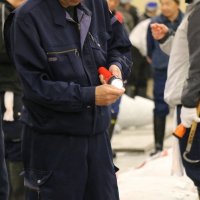 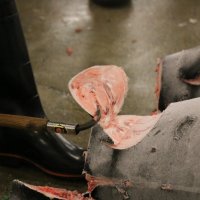 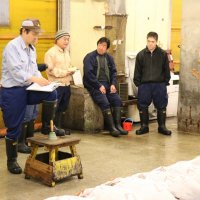 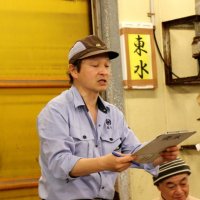 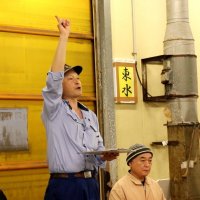 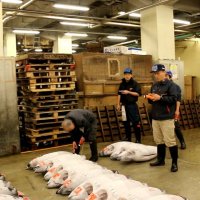 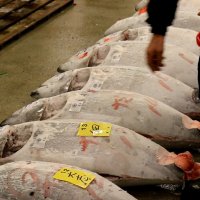 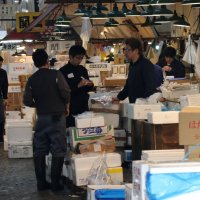